Theories on How Reflexology Works

Reflexology is an ancient form of alternative medicine. Those who practice the massage therapy claim that it goes a long way in releasing pain and tension. A certain section of the medical fraternity claims that it is a pseudoscience that thrives on lucky. However, due to the testimonials of people who have experienced firsthand the benefits of the therapy, it is difficult to deny that it is a good or even a necessary part of the modern world. Although the true theory on how reflexology works is still a mystery, there are several accepted theories that help to explain how the healing technique is able to do what it does. Some of these theories are listed and discussed below.

The central concept in reflexology is the existence of reflex points. It is theorized that the massaging of the feet and hands has the potential to repair other body organs and tissues which may not be functioning well.

This stems from the idea that certain body organs known as reflex points (feet, hands, ears, etc.) are connected to other organs or tissues. Stimulating these reflex points will induce healing in the corresponding organs. For example, the toe is a reflex point of the brain.

Massaging these reflex points improves a person’s health, general well-being and causes the body to heal itself.

Based on research done by Sir Henry Head and Sir Charles Sherrington in the late nineteenth century, this theory is based on the idea that the nervous system responds to the stimulation of the skin and other internal organs.

In reflexology, the application of pressure on reflex zones sends messages and signals to the nervous system. These signals allow the body to relax, enhance the functionality of the body, and improve waste removal, blood, and oxygen circulation. 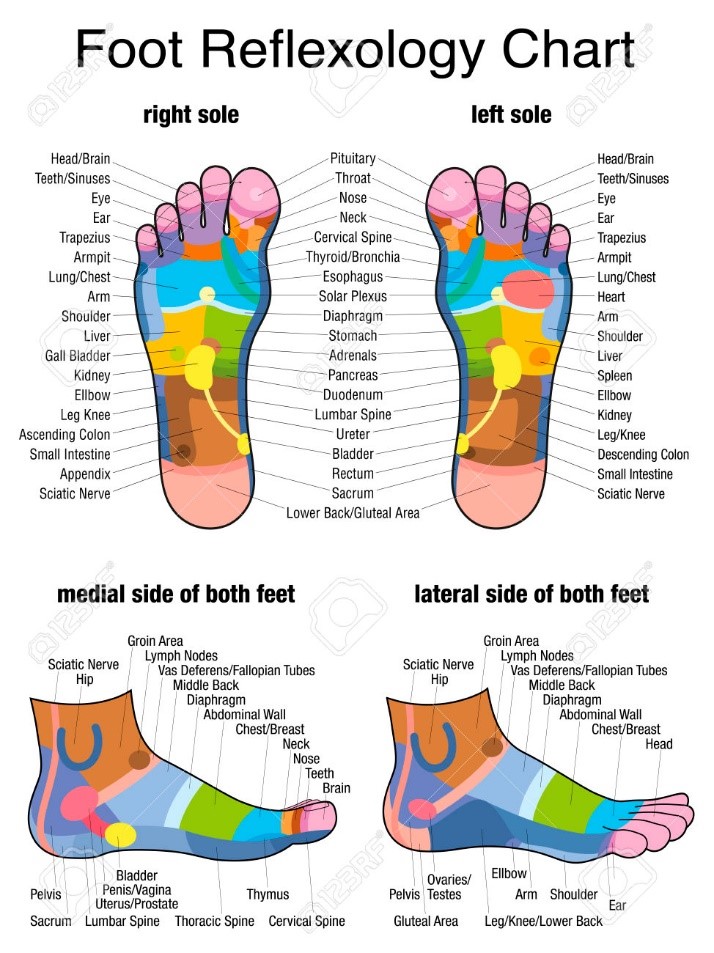 In this theory, it is believed that the human body consists of vital energy of life that flows through several channels. Once in a while, these channels may get blocked or their natural and orderly flow may be altered.   This disturbance in the flow of energy will lead to diseases or some other issues. Reflexology is then responsible for restoring the natural and orderly energy flow and hence combat any disease. The restoration of the energy balance prompts the body to heal itself.

A shift or change in the way the body functions may result in disease or sense of discomfort. Reflexology works to counter-act this upset of balance and restore the body to its optimum functionality. This helps to release muscle tension, relax, and sleep better at night.

When nerve endings are clogged with crystalline deposits, their capacity to transmit impulses is reduced. Reflexology helps to unblock the neural pathways and allow the body to function as best as possible.

As a result, reflexology can be used to reduce pain and stress.

It is believed that human contact has the potential to relieve stress and improve a person’s general well-being. The human-to-human contact made possible by reflexology is known to relieve pain and reduce the effects of insomnia.

The lymphatic system is an important part of the human body that is responsible for several functions including the removal of toxic materials. It is also associated with the immune system – the body’s central and important defense system.

Reflexology is said to work if a person has faith in it. Some believe that the therapy is dependent on a person’s state of mind.

There are certainly several theories associated with reflexology. How reflexology provides several health benefits to the body can be a combination of two or all of the theories listed above. As experts continue to try to figure out how the therapy works, the world will continue to enjoy its benefits such as improved blood circulation, reduced blood pressure, relaxation, pain relief, and restoration of chemical imbalances.